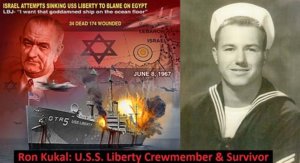 In episode 023 of the USS Liberty archive, Jack sits down with long-time friend and mentor, Ron Kukal, to discuss what happened on that fateful day in 1967, when Israel attempted to sink his US naval vessel. Mr Kukal will also discuss the abuse he and his fellow seamen have been subjected to since they decided to speak up about the US Government's collusion with Israel as well as his experiences on deck when the first torpedo hit, his role recovering the bodies of his friends, his work with the USS Liberty Veterans Association and as a full time Truth Activist, and his spiritual awakening.

"Ron and I have been close friends for well over a decade. In fact Ron was one of the first people to reach out to me after I was suspended during my Parliamentary run....He is a truly great man with an indomitable spirit. What he and the crew of the USS Liberty were subjected to not only on that day, must never be forgotten."

Listen to this rare interview with Ron Kukal, truly one of the bravest men you will ever hear speak.