Liberty Defenders co-founder, Timothy Scott, fought valiantly for his beloved Great Britain in Afghanistan. Scott served in the Grenadier Guards, driven by a "sense of duty to protect his people and homeland".

But, upon his return home to Britain, Tim recognised all was not as it seemed, that he'd in fact been fighting people who had no connection to Britain, and for a corrupt government that was not his friend. Worse still, he realised he had fought for a State that cared little for the rights of its citizens that had put it in power in the first instance.

The second installment of the series will be released this forthcoming weekend. We are editing the second half hour program now (we just received it this morning) and will upload it to the site as soon as it is ready. 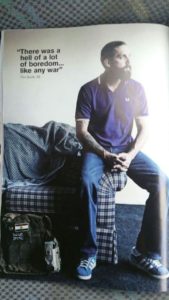 We hope you enjoy the podcasts and latest content.