Since Sadiq Khan's regime's taken office London's crime has skyrocketed out of control. In fact, youth and gang-related violent crime - code for black on black crime - has almost doubled under Khan's leadership.

"Whenever a man like Khan takes over a city - someone who puts ideology, his people and his religion over the wellbeing of the indigenous population and public good - the city devolves into madness, as it has under Khan. Look at Baltimore, Detroit and Malmo. where minority populations have taken those once thriving cities hostage, as examples of what's to come." Jack Sen posited.

On this edition of the Resistance Report, Nick Griffin (former Member of European Parlaiment/BNP leader) and Jack Sen (former UKIP PPC, BNP media spokesman) discuss demographics and criminality and what's behind the sudden spike in violent crime, rape and murder that we're seeing across the length and breadth of the nation. 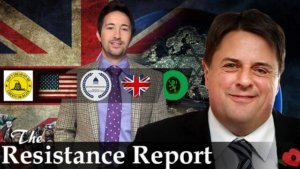 Nick Griffin also explains the cultural impact changing demographics have on communities and people - that the London accent, with which many white Londoners now speak, has more in common with the Jamaican dialect arriving on Britain's hallowed shores last century than it does with indigenous Cockney. Disgusting.

The pair also discuss how murder rates, that have been falling since the Middle Ages, are on the rise across Britain.

Traitors Theresa May & Sadiq Khan team up to attack Trump over Britain First Tweet, harm US UK relations. Nick Griffin and Jack Sen discuss this and other topics on Resistance Radio  (our most popular program this quarter with 18,000+ listens)

And please be sure to subscribe to listen to all of our exclusive content as well as the second parts of all our broadcasts. In order to keep hosting our own content, bypassing YouTube and other untrustworthy and unsympathetic hosting services in the process, we need your support.

Jack can be found on Facebook here (British radio page) and here (South Africa/US channel). Jack's writing can be found on the Occidental Observer as well as here on Resistance Radio. Thanks for your support.