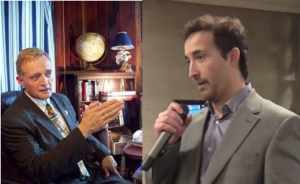 "I was born in London. My granddad, who fought valiantly in World War 2, and his father before him, who served Britain in the first World War, were born in the great capital city. They're rolling in their graves knowing no one is going to do anything."

Jack opined via SKYPE this afternoon.

"Yes, I am angry. Why? Our traitorous government welcomes these ungrateful hate-filled demons in, the establishment watches as our children are raped, innocents are slaughtered, policeman are shot and stabbed, and the very fabric of this country is shredded before our eyes. Good people are scared to act out of fear of being branded racist. The current crop pf keyboard commandos calling themselves nationalists would rather "Sieg Heil" their way around Britain and lather one another up for some afternoon sodomy than travel to London defend the their countrymen.  I'm not sure which of these sickening realities angers me the most."

The men also discuss what we can learn from the invaders, and how the Left have weaponised radical Islam in an attempt to destroy Western civilisation.

To listen to part 2 you will need to become a full member. Your patronage will help us produce more uncensored, unapologetic pro-Western content.

Remember, we can not do this without YOUR support so Please subscribe now. Our exclusive content from Nick Griffin, Jack Sen, Andrew Brons, John de Nugent, Carl Mason, Eddy O'Sullivan and the Occidental Observer's, Professor Kevin MacDonald is second to none. You will NOT be disappointed.

To listen to Part 2

For more from John de Nugent