The former PEGIDA UK leader, and Liberty Defender leader, Tim Scott, sits down with ResRadio to discuss his work to expose the agents being paid to pose as Remain supporters outside Westminster. He also has recorded a second short podcast explaining his work exposing the Eco-terrorists currently terrorising London this week on behalf of the establishment, which we have uploaded below the lengthier discussion. 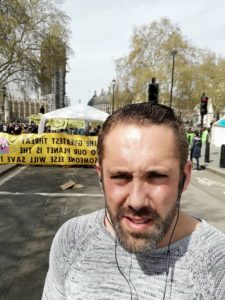 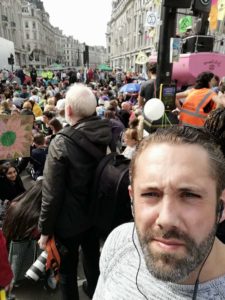 Although Tim's videos, which you will find at the bottom of this post - are being broadcast on social media - specific details of his current investigations will only be broadcast in our subscribers area. Tim has been maligned repeatedly by the establishment due to his tireless efforts to expose Remainer treachery and Leftist hypocrisy therefore from this point forth we will be keeping all podcasts (both parts one and two) detailing his work accessible to our subscribers only.

We also wanted to wish everyone a Happy Easter. Although times are hard in Britain, we believe that the tide is turning and good people will prevail.

The following is a letter Tim has asked us to send out with his two recordings.

I wanted to give you an update about the activism that we have been engaging in this week and what we have planned for the rest of the month.

Firstly I am proud to say that we will have a team in Belfast on the 27th in support of "Soldier F", the British soldier unfairly charged in Northern Ireland. We will be uploading more information on the event when we get closer to the day.

I have also been quite busy in central London the past few days exposing the people and organisations behind the Leave campaign. (please see video and supporting evidence below)

Although there is still so much work to do, and I am under no illusions that the government will listen to any of us, we have a moral and civic responsibility to continue to confront their treachery. I am very pleased with the amount of exposure we are getting and the fact that the Establishment knows we will not go away.

This past week, after receiving intel from local black cabbies, I pursued a lead linking the BBC directly to the aggressive paid-Remainer protesters causing trouble outside Parliament. The place where these people congregate, as well as where I believe they collect payment for their vile actions and the protest props they wield while out, is a property linked directly to the BBC's former Art Director. (Supporting evidence is provided below the video below.) I received the information through my links. This included black cab drivers and good patriots who monitor the paid Remainer activists stationed outside Westminster for the Defenders.

People often ask me why more Brexiteers aren't standing daily outside Westminster protesting. Trust me when I tell you that I go down as much as possible, often times spending my lunch hours making my presence felt. I am fortunate though as I live and work nearby. The vast majority of the good men and women who travel down to London - random people I meet outside Parliament with no specific political affiliation as well as our fellow Defenders who travel in - live far from London and do their very best.

The main difference between the activists who show up to protest our government's tyrannical decision to undermine Brexit and the Remainer traitors who are there day in and day out at Westminster trying to undermine our democracy, is who's behind them.

When Brexiteers travel down to Westminster we do so on our days off, when we can take time away from our families and daily lives. We pack our own lunches, source our own train and bus tickets down and do so quite willingly out of love for our country. The Remainers who are there day in and day out are paid activists. This is why they are more visible and on hand on a daily basis. They are not solely there because they hate this country (they literally hate us) and all that our sovereignty represents, but because they are paid to do so.

Please visit our site for updates. Thanks again for all your kind support.

Here is our latest podcast discussing our forthcoming work as well as video Tim produced while exposing the paid Remainer traitors.

Please log in to listen to the following podcasts, simply too truthful for social media. We hope to have the latest from Paul Rimmer next week. Eddy O'Sullivan is working on that as I write this.